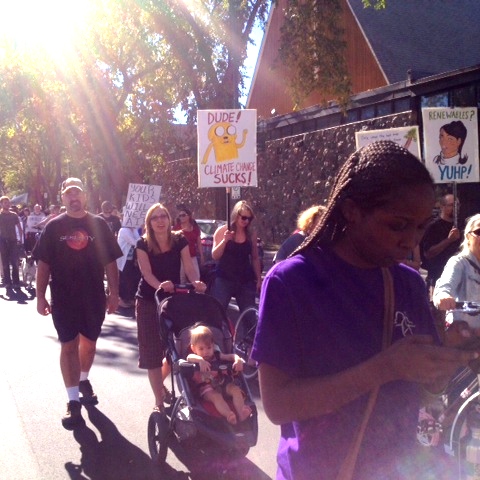 Students and faculty increasing the pressure for post-secondary institutions to divest.

SASKATOON, SK: Divestment from fossil fuels has become a hot topic at the UN climate talks in Peru. Already, $50 billion has been divested globally by concerned educational institutions, governments and individuals. Educational institutions are the second largest sector divesting from the fossil fuel industry. In Canada, 27 post-secondary institutions now have divestment campaigns and just last month, Concordia University became the first university to agree to a partial divestment of $5-million. Of the universities with divestment campaigns, according to publicly available information, indicates the University of British Columbia has the greatest amount invested in fossil fuels.

“The higher education divestment movement is starting to have a real impact on college and university practices across North America,” says Naomi Maina, PhD Researcher with the Sustainability and Education Policy Network (SEPN). “And this in turn will impact the economy and ultimately the environment.” SEPN is releasing results from its on-going research study on the divestment movement in Canadian post-secondary institutions. The study is one component of a broader study evaluating sustainability uptake in Canadian formal education.

The 27 Canadian post-secondary divestment campaigns are across six provinces: ten institutions in Ontario, eight in British Columbia, four in Nova Scotia, two in Québec, two in New Brunswick, and one in Prince Edward Island. SEPN has also identified the top three institutional endowments, and the estimated proportion of those currently invested in fossil fuels:

The full table is found at the end of the media release, indicating all 27 Canadian post-secondary institutions where divestment campaigns are underway, including, where the information was publicly available as of October 2014, the amount of money currently invested in fossil fuels.

“Divesting from fossil fuels shows leadership: universities and colleges who divest are climate action heroes,” says Kevin Millsip, Co-founder and Director of the Global Youth Education Network, a SEPN partner based in B.C.

In many of these 27 active divestment campaigns, leadership has primarily been by students. Both the Students’ Society of McGill University and Dalhousie Student Union have voted to divest their own endowment funds. Student referendums to endorse divestment have also been passed at Trent University, University of New Brunswick, University of Victoria, and University of British Columbia. Other actions have included campus protests, petitions, rallies, climate action workshops, and open letters signed by students, faculty, alumni and community members.

“Students are leading the fight for fossil free campuses by example,” says Bilan Arte, Deputy Chairperson of the Canadian Federation of Students, another SEPN partner. “As concern for sustainable investment continues to grow, so does the tireless work of student activists all across the country.”

SEPN is a national network of researchers and organizations advancing sustainability in education policy and practice. Its recent research has identified that only half of all Canadian 220 post-secondary institutions have policies addressing sustainability issues. Of specific policies that address climate change, the main focus is on reducing institutional greenhouse gas emissions and operations.

The divestment research brief can be found here.