An institution received one point for having a sustainability initiative in each category.

SI Laggards = SI Score of 0. Institutions with no sustainability initiatives.

To view these results in a map format, please click: Leaders and Laggards Map 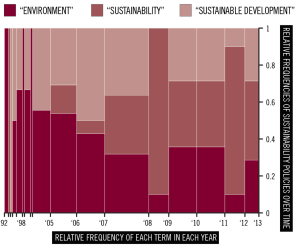 Shifting from ‘environment’ to ‘sustainability’

The study also identified a change in terminology used in policies over time, with the term ‘sustainable development’ decreasing slightly in use over time, with a more substantial drop in the number of policies using the terminology of ‘environment.’ Since 2005, there was a marked increase in the use of the term ‘sustainability’ in policy. Use of the term also increased as community population size increased, as well as being the term of choice in Ontario and the three Prairie provinces.